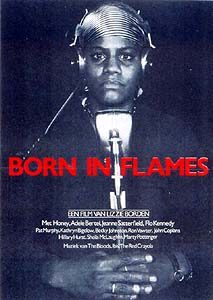 In order to present Radio Calaflow, we decided to screen in front of AnarchaServer (AS) in the spaceship of Uteroxy a beautiful feminist science fiction movie directed by Lizzie Borden in 1983 called Born in Flames.

The plot concerns two feminist groups in New York City, each voicing their concerns to the public by pirate radio. One group, led by an outspoken white lesbian, Isabel operates “Radio Ragazza”. The other group, led by a soft-spoken African-American, Honey operates “Phoenix Radio.” The story involves several different women coming from different perspectives and attempts to show several examples of how sexism plays out, and how it can be dealt with through direct action.

You can read more about the movie here. And we let below a short teaser. To note that we could find in opensubtitles a srt file with a spanish translation of the movie.